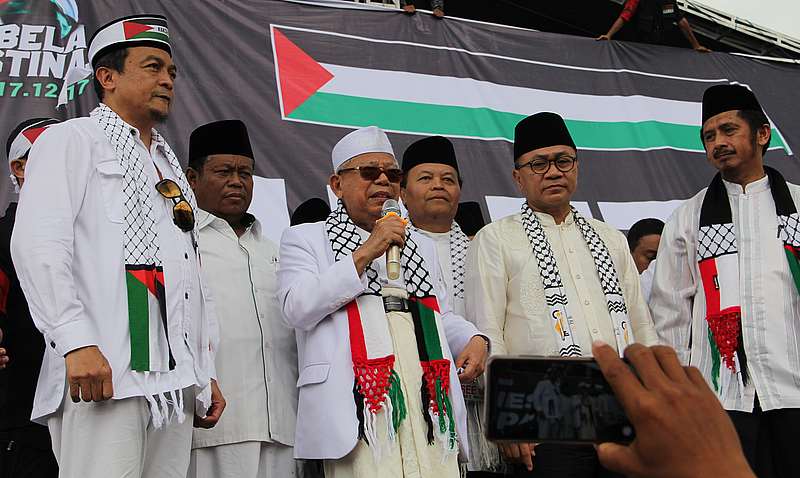 JAKARTA (Jurnalislam.com) – Today, Monday (18/12/2017) United ,Muslims support unity delegation led by the Chairman of MUI KH M’aruf Amin will go to the American Embassy. Kyai Ma’ruf along with a number of representatives of Islamic mass organizations will present a Muslim petition about the annexation of Jerusalem by US President Donald Trump.

In a petition read by MUI Secretary General Anwar Abbas on Action 17.12.17 at Monas yesterday it contains a number of important points will be submitted. Among these are the Indonesian Muslims’ rejection of President Trump’s claim regarding the status of the City of Jerusalem because it has injured a sense of justice. Ask the US number one person to immediately revoke his decision.

Abbas continued, if the United States does not immediately revoke its unilateral decision regarding the claim of the city of Jerusalem as the capital of Israel, then the US will lose its legitimacy as a mediator of peace between the Palestinians – Israel. Urge all countries to reject the unilateral and illegal recognition of President Trump.

Indonesian Muslims urged all countries in the world, especially those joined in OIC, to immediately cut off diplomatic relations with Israel or at least not to move its embassy from Tel Aviv to Jerusalem. Furthermore, supporting the results of Extraordinary KKT held in Istanbul, Turkey, on December 13, 2017 yesterday.

Indonesian Muslims also urged the House of Representatives to immediately form a special committee (Pansus) to review the form of investment of US companies in Indonesia.