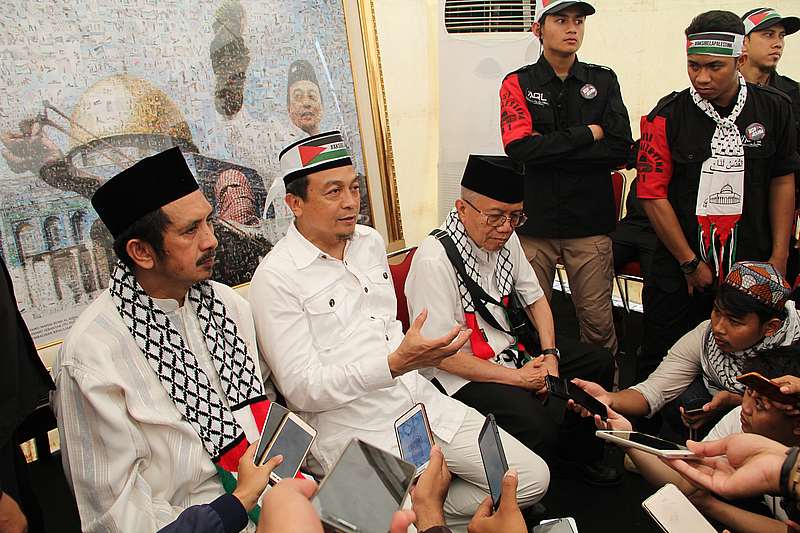 Chairman of the National Movement of Fatwa Guards (GNPF) Ulama, Ustadz Bachtiar Nasir revealed, it only has three days to hold the event that is touted as the act of care the largest palestina in the world.

In addition to a short time, Ustadz Bachtiar Nasir (UBN) also admitted at that time his side did not have the funds to hold an event of that size.

“And our preparation is only three days. imagine how many billions of expenses to spend on this big event and no money, “UBN told reporters in Monas, Jakarta, Sunday (17/12/2017).

Funds also collected after the GNPF held a tabligh akbar care about Palestine in the mosques in Jakarta. Although the action facility is more complete than the previous actions, UBN denied if the action is funded by certain parties.

“This is purely the fund of the people we get after traveling around the mosques. Despite the coins but the blessings, “he said.

“So there is no funding from certain businessmen or politicians,” he continued.

With short preparations, UBN is grateful for a successful running event. Based on the data he received, the action participants reached approximately four million.

“When viewed from the density, the number of participants about four millions, Insya Alloh,” he explained.

In addition, UBN also expressed his pride on the unity of Muslims in action led by the Chairman of MUI, KH Ma’ruf Amin it.

“Alhamdulilah, MUI and mass organizations under it are made easy to unite,” he said.
According to him, the action is a moment to reinforce the unity of the ummah.

“And the most important thing is the spirit of the Ummah to be a Palestinian liberator from the Jewish grip and the enormous American crime that drives us to unite and do for Palestine,” he concluded.

The action that began with the morning prayer was attended by dozens of national figures, clerics, representatives of mass organizations and officials ended at exactly 11:00 pm.

In the event, the event was filled with the speeches of figures and petition readings by the refusal of Donald Trump’s decision on the annexation of Jerusalem as the capital

The petition read out by MUI Abbas’s secretary general MUI will later become a statement of the attitude of Indonesian Muslims.