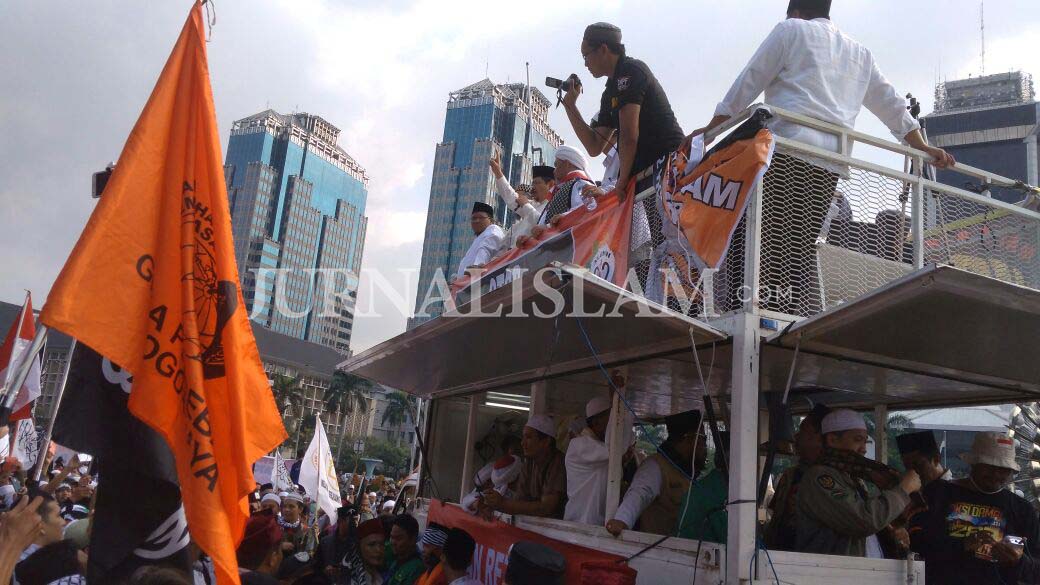 JAKARTA (Jurnalislam.com) – Vice Chairman of Alumni Presidium 212 Asri Harahap read out 5 calls for resolution of Action 287 in front of hundreds of thousands of mass who attended the act of rejecting Perppu no 2 in 2017 in Monas, Friday (28/07/2017). Here are 5 calls from the Alumni 212 Presidium to the government, DPR, Ulama, President to Muslims in Indonesia:

1. To all Muslims in Indonesia regardless of the school that followed his jamaahnya dinaunginya, the party that he believed forget essentially we are one body dalah hadith Rasulullah saw said which means we do not forget

“The parable of the believing believer is like one body when one member of the body moans in pain so the whole body will feel the heat and heat”. (H.R Muslim)

HTI is an integral part of the Islamic ummah, now HTI is the first victim, and most likely will be followed by the next victim, if any part of the Muslims who rejoice to see the condition of HTI, they do not realize that the enemies of Islam are never tired of enemies of Muslims , They will eventually become the next target

2. To the House of Representatives of the Republic of Indonesia think somewhat far ahead do not let the short-term calculation of sacrificing the interests of the people, do not fear intimidation, do not soften and bribe bribe and the other be the real people’s representative, do not be a seal stamp of the regime’s genitals with Rewards of worldly rewards

4. To the MUI is expected to give a purely religious opinion, so that the opinion of the MUI becomes weighty in giving opinions, not to give opinions to the public that actually opens the door of the arbitrariness of the regime against the Muslims

5. To the President of the Republic of Indonesia we want that the political power obtained by the 2014 presidential election is only a temporary provision of Allah Subhanahu wa ta’ala, God is pleased to extend or shorten your power in this world, for the honorable sir kepolan to wish us from Presidium Alumni 212 , Especially to the President of Indonesia to deign to withdraw in accordance with the will of Allah azza wajala.