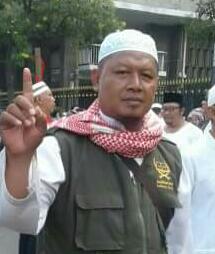 This he conveyed when responding to the statement of PDI-P secretary general Hasto Kristiyanto who states, his party is not afraid to lose the voice of Muslim voters because it supports the passing of Act No. 2 of the Society of 2017.

“We’ll see what their statement is whether it will be absolutely consistent with what he said,” he told Jurnalislam.com after giving material in Jumantono, Karanganyar, Tuesday (1/11/2017).

Surawijaya believes that the PDIP which supportsmass organizations law and supports the anti-Islamic policies make Muslims as the scapegoat, but on the other hand still use Islamic symbols to win their party.

“This is not consequent, it ca also be seen as hypocritical, and worse than that,” he added.

Furthermore, Ustaz Rowi Sapaanya rate, such statements are not appropriate to be spoken by a party figure. Besides destroying unity, he said, it will also generate domestic polemics, especially among Muslims.

“Certainly such words are not worthy in speech by people labeled public figures, where people should be promoting unity, yet it is these people who are dividing people, and dividing the nation,” he said.

As is known, PDI-P is one of the parties who are keen to support the legalization of the Public Order Orgs into the Ordinance Act, and after the enactment of Act No. 2 of 2017, PDI Secretary General Hasto Kristiyanto stated that his party is not afraid of losing the votes of Muslim voters in PDIP, Menteng, Jakarta Center, last Saturday.