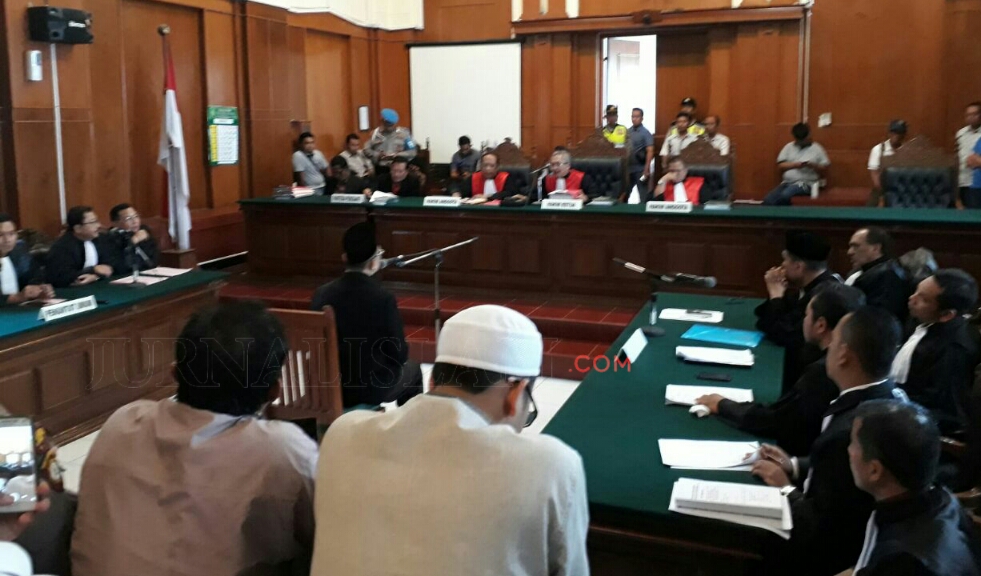 SURABAYA (Jurnalislam.com) – Experts of the Indonesian Communist Party (PKI), Alfian Tanjung held again in PN Surabaya, Wednesday (04/10/2017). The trial with the agenda of reading the indictment and continued the objection note (this exception) was originally done last week.

In the agenda of reading the indictment, the Public Prosecutor (Prosecutor) is present complete, amounting to 6 people consisting of the Attorney General of Indonesia and Kejari Tanjung Perak. Interestingly the Head of State Prosecutor’s Office (Kajari) Tanjung Perak was also present to intervene directly to indict Ust. Alfian Tanjung.

For that, TAAT proposes 5 objection points, among them; 1. Indictment of ne bis int intem because has been examined and decided upon void by law, 2. indictment incomplete, incomplete, unclear (obscur) for not deciphering criminal act, 3. indictment improper applying chapter, 4) indictment does not elaborate element but only translate from audio visual to writing, 5. articles applied on the elimination of racial and ethnic discrimination must be through evaluation and justification of Komnas HAM, can not be reported by individuals / individuals.

“TAAT believes that the juridical arguments and legal facts conveyed by Ust’s Legal Counsel. Alfian, the prosecutor’s indictment will be decided by the Panel of Judges with the verdict of the indictment null and void, “said Coordinator TAAT, Drs. Abdullah Al Katiri, S.H. at location.

The trial will resume on Monday (9/10/2017) with the agenda to respond to the exception of the legal advisors of Alfian Tanjung.